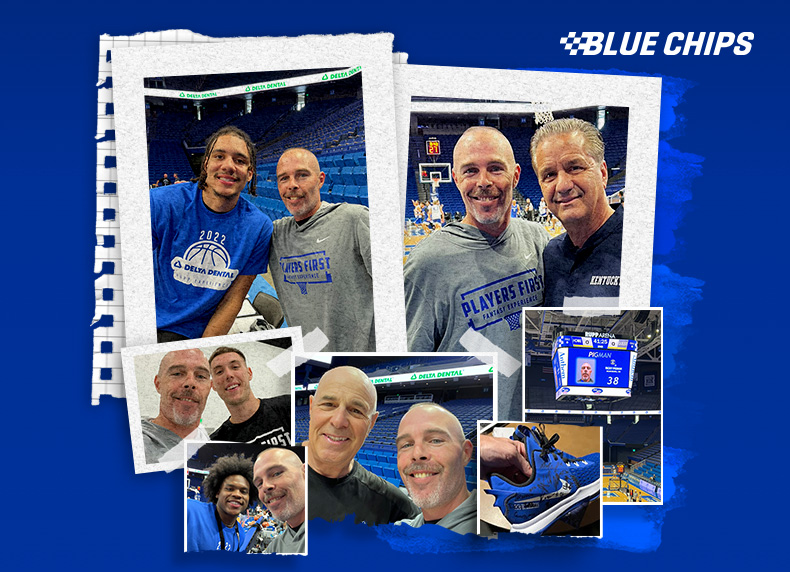 In August, Blue Chips gave away one free spot to the Players First Fantasy Experience – a program that allows fans to live their dream of being a Kentucky basketball player for one weekend. The lucky winner was Ricky Pigman of Dayton, Ohio. Ricky described the experience as, “the most memorable weekend ever”.

Day 1: “It still gives me goosebumps.”

Ricky arrived for check-in on Friday.

“I got there at about 11 o’clock. I don’t like to be late. Checked in and they gave me my credentials, then they opened it up and BOOM! Just standing there on Rupp Arena’s Floor. It still gives me goosebumps.”

Next, he was taken to the guest locker room where he received a locker with his name on it. They also gave him a duffel bag with all kinds of high-end Nike gear such as two sets of reversible uniforms, compression tights, NBA socks, shoes, a long-sleeve hooded t-shirt, a regular Nike t-shirt, and a Nike sweatshirt.

He was ready to play ball.

After suiting up, the players participated in a shootaround on Rupp Arena.

“Made my first bucket!,” Ricky said. “Got to shoot for about 30 minutes and then we participated in a scrimmage.”

Players then went through a “combine” for the GMs to evaluate them for the upcoming draft that evening. Ricky gave us his own evaluation of his performance.

Obviously, Ricky must’ve performed better than he thought because he caught the attention of Dino Gaudio – former Wake Forest head coach – who was the GM that drafted Ricky to his team. Ricky’s coaches for his team were CJ Frederick, Chris Livingston, and Brennan Canada.

Friday evening, the players dined at Versailles, on the luxurious WinStar Farms, for dinner. Ricky described that experience for us.

“It was beautiful. First off, we got to ride the team bus out there which was so cool because of how big and nice it is. Then we got to WinStar, and it was just beautiful. I had never been on a horse farm before.”

Players were served dinner, which was catered by Gus’ Chicken, and listened to some guest speakers.

“All the GMs got up and spoke about their teams – Dino Gaudio, Jerry Wainwright, Seth Greenberg, and Jerry Haffey Senior. It was awesome to hear them speak, but the best part was getting to mingle with the guys,” Ricky said. “Sitting next to them, eating and talking with them… You realize these players are really just normal kids.”

After dinner, the players returned to the hotel to rest up for the big Saturday they had awaiting them.

“We went right into the games Saturday morning,” Ricky said. “We lost every game up until Sunday – where we made it to the championship but then lost in the title game.”

After the games were over, fantasy camp guests could take part in some 3-on-3 action. Ricky chose to spectate instead.

After the 3-on-3 was over, some played pickleball, some continued shooting around on the court, and others took pictures with the entirety of the Men’s Basketball Team.

Ricky described what it was like to actually spend that time talking with the players: “I talked to Jacob (Toppin) a lot, because I’m from Dayton,” Ricky said. “I told him that in my house, Obi is JACOB’S brother, not the other way around. And he got a big kick out of that.”

Saturday night the players went to the Hilton for cocktails and dinner.

“At dinner I got to talk to all the assistant coaches,” Ricky said. “They were really cool. Chin was my favorite. He was so funny.”

After dinner, the UK team participated in a small game of Family Feud, and there was an auction in which they donated all the proceeds to Eastern Kentucky Flood Relief.

“Family feud was hilarious,” Ricky said. “They auctioned off tickets to games at Madison Square Garden against UCLA, the Kansas home game – all the big non-conference games, you had packages. The most expensive one went for about $10,000 and for that you get tickets to the Kansas game in Rupp and get to have a private dinner with Coach Cal and Bill Self the night before.”

To end the night, Fantasy Camp players all received gifts – the type of gift you received depended on the number of years you had participated in the Fantasy Camp.

“First-year people like myself got a signed ball by Coach Cal. Second-year players got a little 2×3 piece of the floor from the 2012 National Championship court signed by Coach Cal – which was really, really cool,” Ricky said. “Then there were some personalized bottles of bourbon. The 10-year guys got a personalized poster of the former players in the NBA, like the mural outside the locker room, with some new guys on it. That was super cool.”

The last day was championship Sunday. Ricky didn’t get to play on the last day, because he had hurt his ankle on Friday and it was swelling. However, his team won their first game and then lost in the championship.

“I was there and that’s all that mattered,” Ricky said. “The tournament was cool. The champions got to cut down the nets.”

As Ricky was making his way to the locker room to pack everything up and head back to his hometown in Ohio, he got to have a little one-on-one chat with Coach Cal himself.

“He was walking back towards their locker room, and I got to talk to him for three or four minutes. That was pretty cool,” Ricky said. “I just wanted to thank him and wish him good luck on the season. He asked where I was from, and we got to talking about Dayton for a minute. Then he went one way, and I headed down 75.”

Ricky said that his overall favorite part of the entire weekend was interacting with the guys, the players, the coaches, and the other guests at the fantasy camp.

“I met a lot of guys over that weekend that I will probably stay in touch with for the rest of my life,” Ricky said, adding, “I just want to personally thank Blue Chips, because if it wasn’t for you guys, I would’ve never gotten to do something like that. So thank you all!” 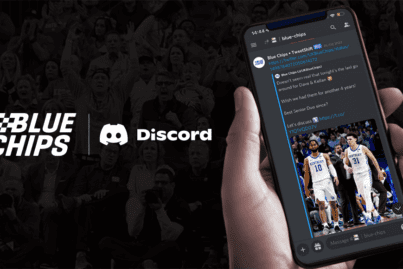