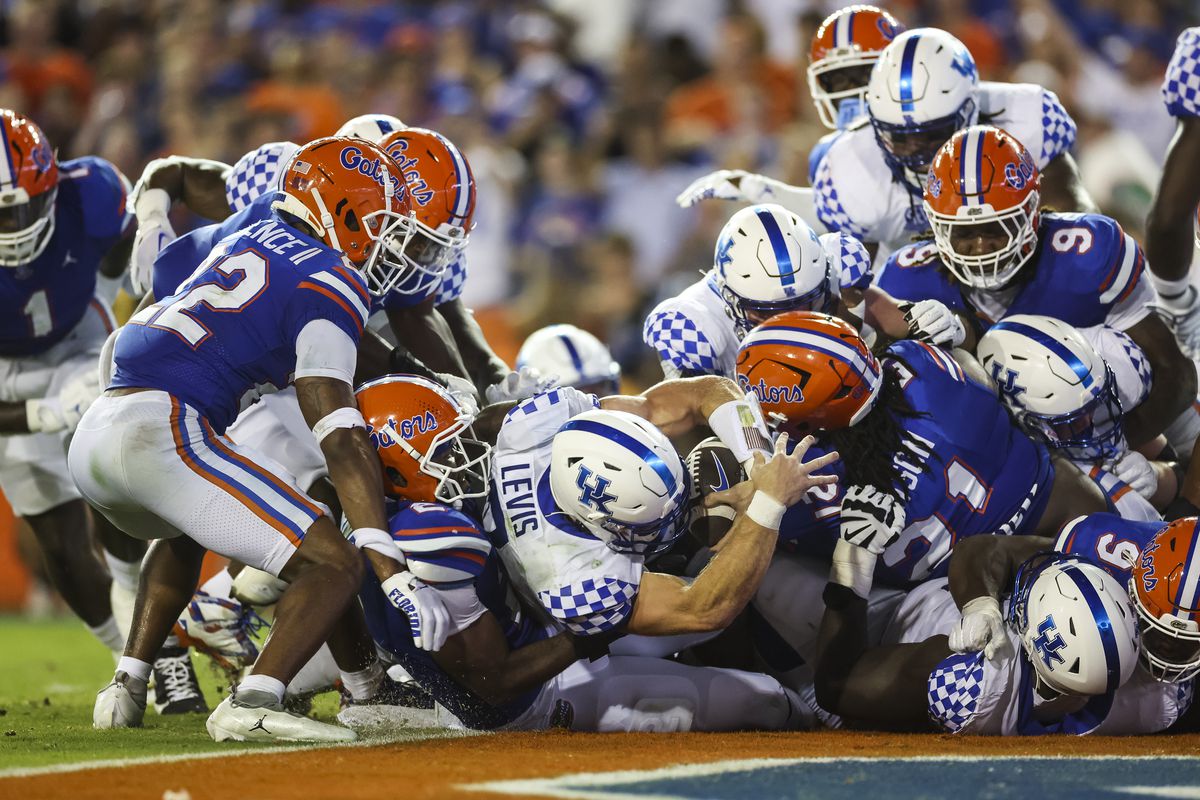 Last Saturday, Kentucky made history as they went into a sold out Ben Hill Griffin Stadium – aka The Swamp – and defeated the #12 Florida Gators. Coming into the week, Florida was the hottest team in the country. Having just defeated #7 Utah at home, Florida made the biggest leap in AP Top 25 Poll history – climbing from unranked (#37 to be exact) to #12 in the nation.

Many analysts predicted the Gators to come out victorious, including Roman Harper of SECNetwork who called Kentucky “soft” and that the Gators would win this game “convincingly”.

However, Kentucky proved the exact opposite. Brad White’s defense absolutely shut down the Gators’ quarterback Anthony Richardson – holding him to just 4 rushing yards on 6 carries and 14/35 passing for just 143 yards. The Cats intercepted Richardson twice and Keidron Smith Jr took the second all the way to the house for six. Kentucky trailed Florida at halftime 16-13, causing a bit of panic for the Big Blue Nation. However, our guys never wavered — shutting out the Gators for the entire second half and scoring 13 unanswered, solidifying the 26-16 dub with a Matt Ruffalo Field Goal in the final two minutes.

Saturday marked the first time since 1976 that the Cats have defeated the Gators in back-to-back seasons. Kentucky has now won 3 of the last 5 matchups against Florida. Kentucky fans have gone through the gauntlet in the Kentucky-Florida series.

But with this win, it is evident that times have changed.

Stoops has taken the culture and mentality of this program to heights that would have never seemed possible even ten years ago. Kentucky is now ranked #9 in the AP Poll – the highest they’ve been since 2007 – and it only took two games. The defense led by Jordan Wright, JJ Weaver, and DeAndre Square has been phenomenal thus far. One of the biggest question marks coming into this season was the secondary; they’ve yet to allow a passing TD this season. According to PFF, the secondary is ranked 13th in the country.

It’s easy to get ahead of ourselves, but all signs are indicating that if the Cats handle business in these next two weeks against Youngstown State and Northern Illinois (who we’ll know more about after their matchup with Vandy this weekend), they will be heading to Oxford 5-0 with the potential of cracking the Top 5. Also worth noting – that game will be the return of CRod!

This season, Kentucky controls their own destiny.

A run at the SEC Championship and College Football Playoff are lofty goals in any season, but not this year. The Cats are ready to take on any challenge and Stoops has them prepared to do anything and everything to make those dreams come true.