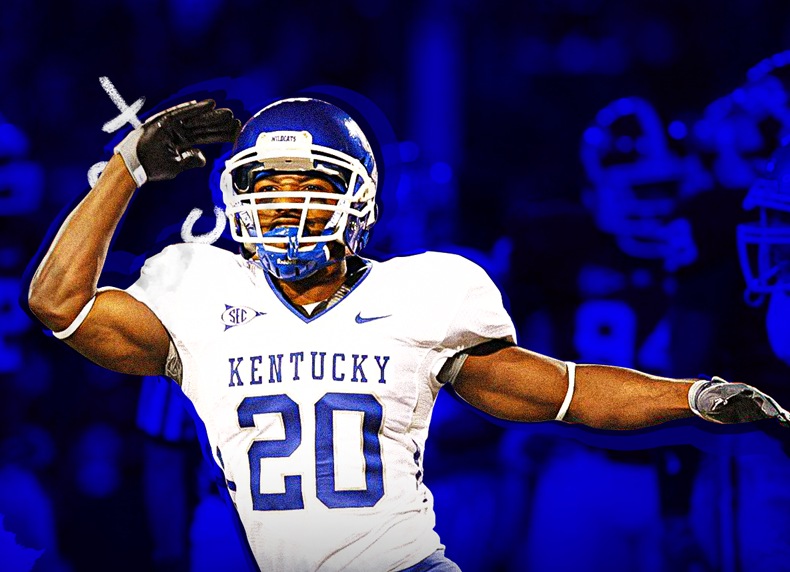 We are all-in on our 2022 Kentucky Wildcats, and for good reason – they are ranked No. 8 in the nation! However, as UK fans, it is in our DNA to look ahead. On Tuesday the SEC unveiled the full schedules for each team’s 2023 season. Our initial reaction: Kentucky is going to have its toughest schedule in the Stoops’ era, plus a home slate that fans will drool over.

Let’s take a full in-depth look at it. 👀 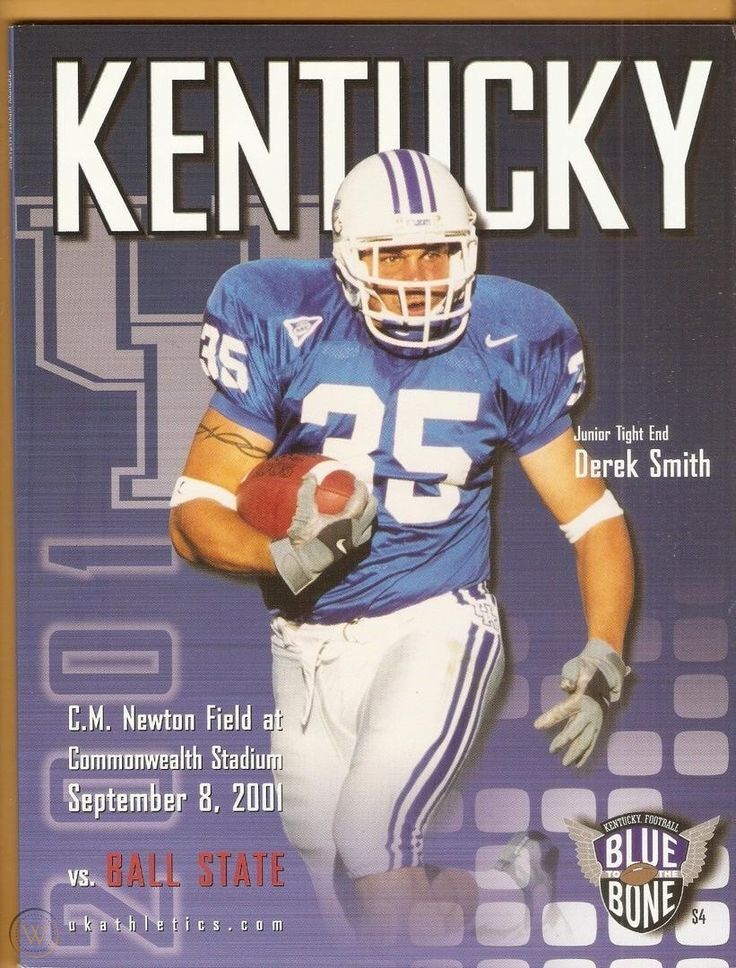 Kentucky will kick off the season against a MAC opponent (just like they did this year against Miami OH) – this time being the Ball State Cardinals. Kentucky and Ball State have met just once before in 2001, to which the ‘Cats took home a 28-20 victory. 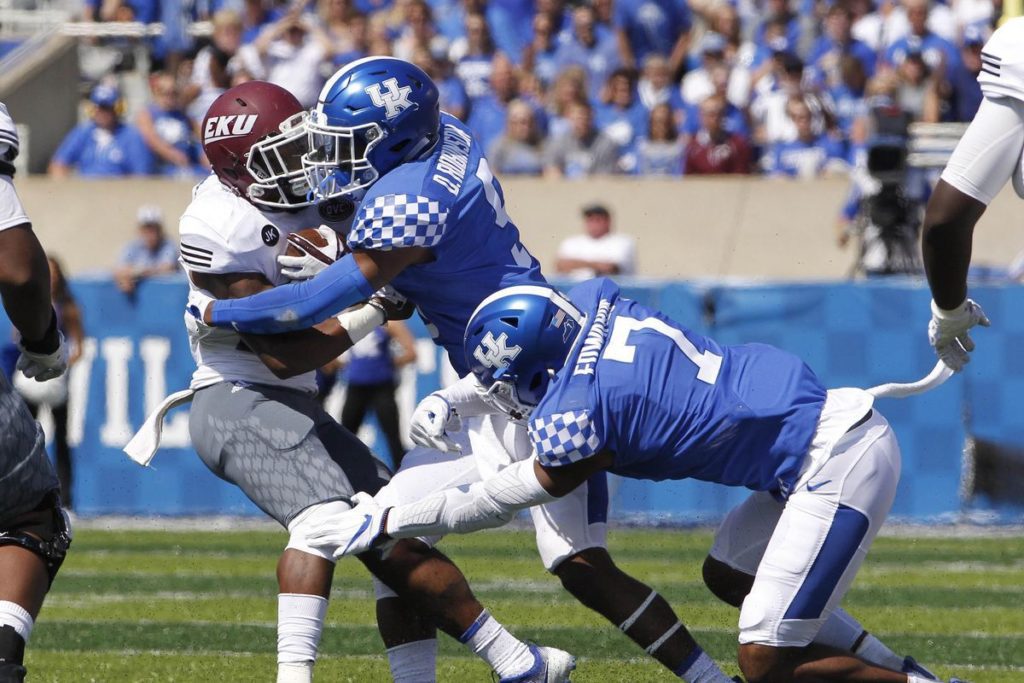 For the sixth time in our history the ‘Cats will take on our FCS foes from down the road in Richmond. Kentucky is currently 5-0 all-time against the EKU Colonels, with the last meeting in 2017 ending in a 27-16 win for the ‘Cats. 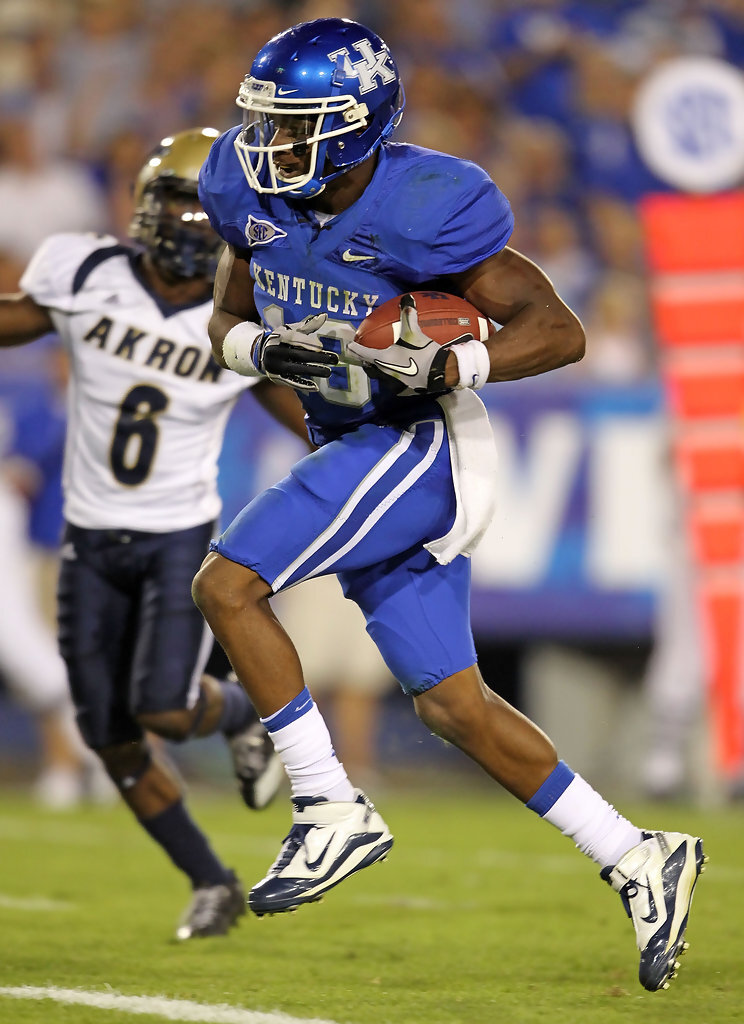 Some more “MACtion” for the ‘Cats as the Akron Zips will travel to Lexington for the first time since the 2010 season. In the last meeting, Kentucky – led by Randall Cobb, Derrick Locke, and Mike Hartline – came away with a monster 47-10 victory. 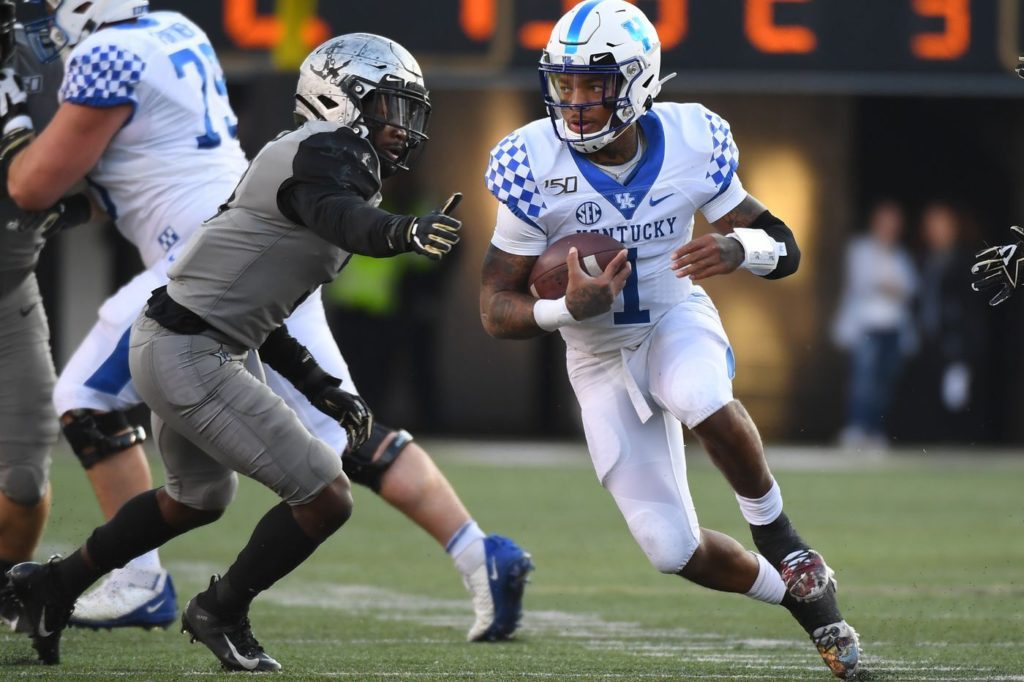 For the first time since 1937, Kentucky will travel to Nashville in September. This will also be the first time since 1947 that we have played Vanderbilt in any month other than November. Making the trip to Nash for some warm weather rather than the usual freezing temps will be a great change of pace for Big Blue Nation, who takes over Broadway and Commodore Stadium for this away matchup every time it comes around. 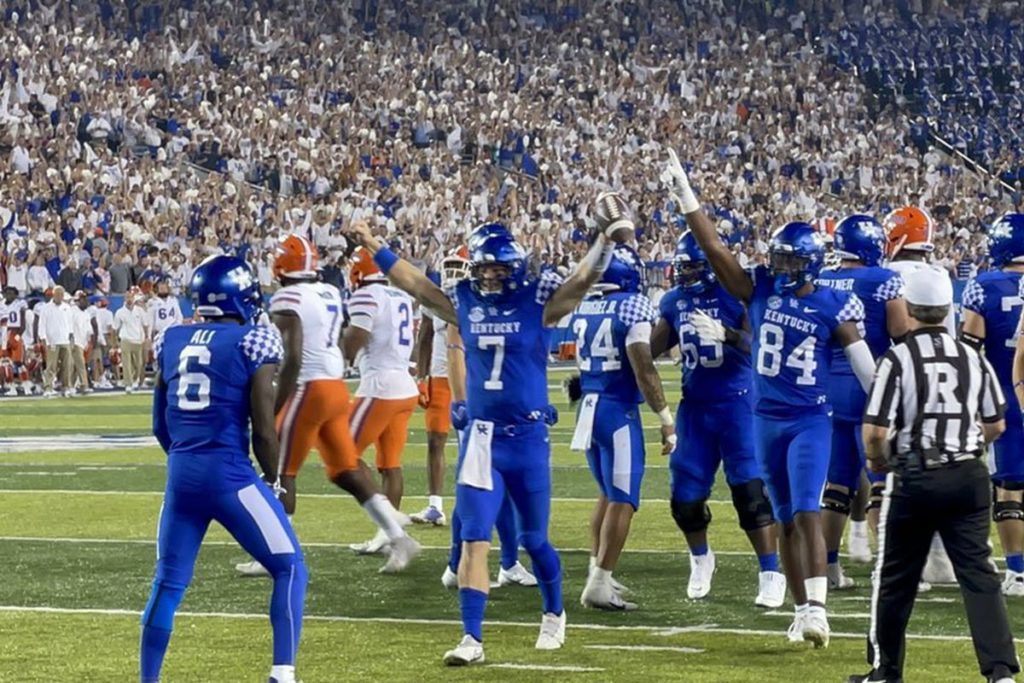 Can we make it three in a row against the Gators? Last time Florida traveled to Lexington, Kentucky ended a historic drought, beating them on our home turf for the first time since 1986. This year the ‘Cats made history by beating Florida in back to back seasons for the first time since 1976-77. When was the last time UK beat UF in three straight years? 1949-1951, under the leadership of Bear Bryant – who Stoops passed as UK’s all-time winningest coach with his win over Florida two weeks ago. 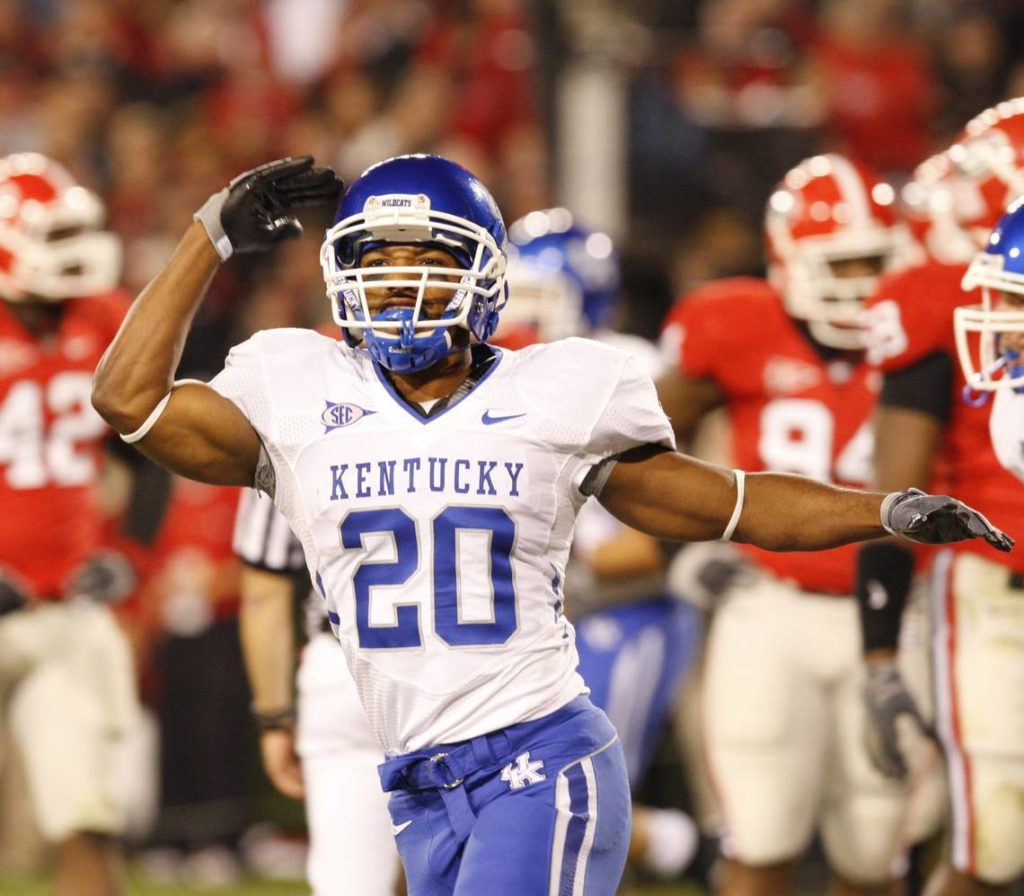 No team is hotter than the Bulldogs are right now, and they’ll likely continue that momentum into next season. That being said, Kentucky is a Top 10 team currently with a plethora of young stars up and down the roster. They should give Georgia the fight of their lives this year in Lexington, and do the same next year in Sanford, where the ‘Cats have not won since 2009. 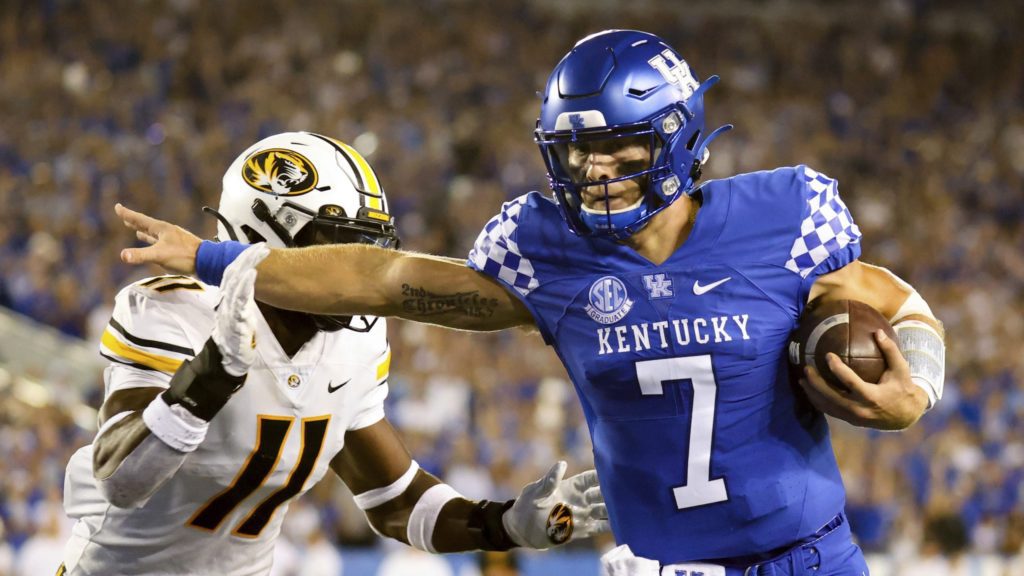 Mark Stoops has had no issue handling Missouri during his tenure as head coach. The ‘Cats have won five of the last six against the Tigers, and will look to improve that to six of the last seven this season. And as for next year’s matchup, aside from Stoops’ first year as head coach, UK is 4-0 against Mizzou in Lexington. Go ‘Cats. 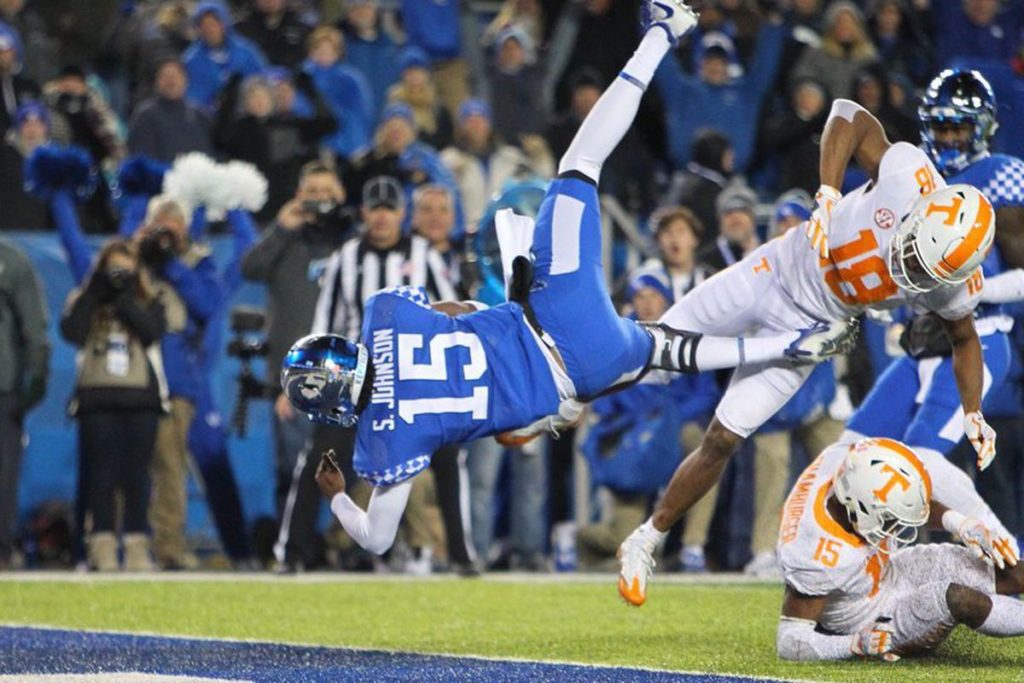 Tennessee has a really good team this season, and that matchup down in Knoxville will be a battle for the ages. But as for next season, getting the Vols in Lexington on Halloween Weekend will be one of the most anticipated matchups of the year. The ‘Cats have not beaten UT in Lexington since 2017 – on the back of Stephen Johnson’s 4th quarter heroics – and coincidentally that was the last time the ‘Cats faced the Vols on Halloween. 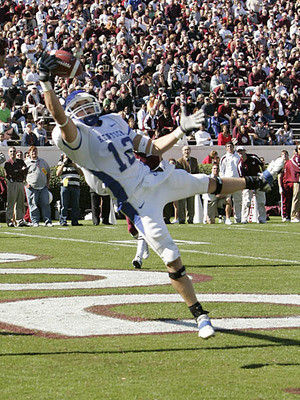 Former beloved Kentucky OC Mike Leach has the Bulldogs running Hal Mumme’s air raid down in Starkville, trying to replicate what they did in Lexington with Tim Couch. The ‘Cats and ‘Dogs should be another great game this year in Kroger Field, with Kentucky coming away victorious of course. Next year’s matchup will be an interesting one – Kentucky has not won in Starkville since 2008. Call it the “Cowbell Curse,” but Stoops will have another opportunity to make history by crossing off that feat. 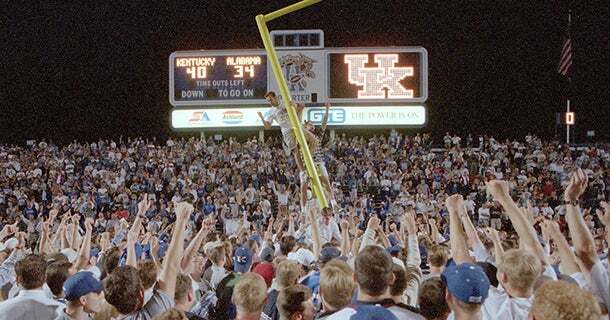 Senior Day will be one heck of a sendoff for our guys next year – getting a chance at Nick Saban and the Alabama Crimson Tide for the last home game of the year. The Tide’s last visit to the Bluegrass State came in Stoops’ first season back in 2013. Kentucky’s lone win against ‘Bama in the past century came in 1997 behind Tim Couch and Craig Yeast in one of the greatest games in Kentucky Football History. With this extremely talented young core getting a year of experience under their belt this season, and playing nine games in 2023 before the matchup with the Tide, it’s safe to say we’ll be ready to take a shot at the king and shock the world come November of next year. 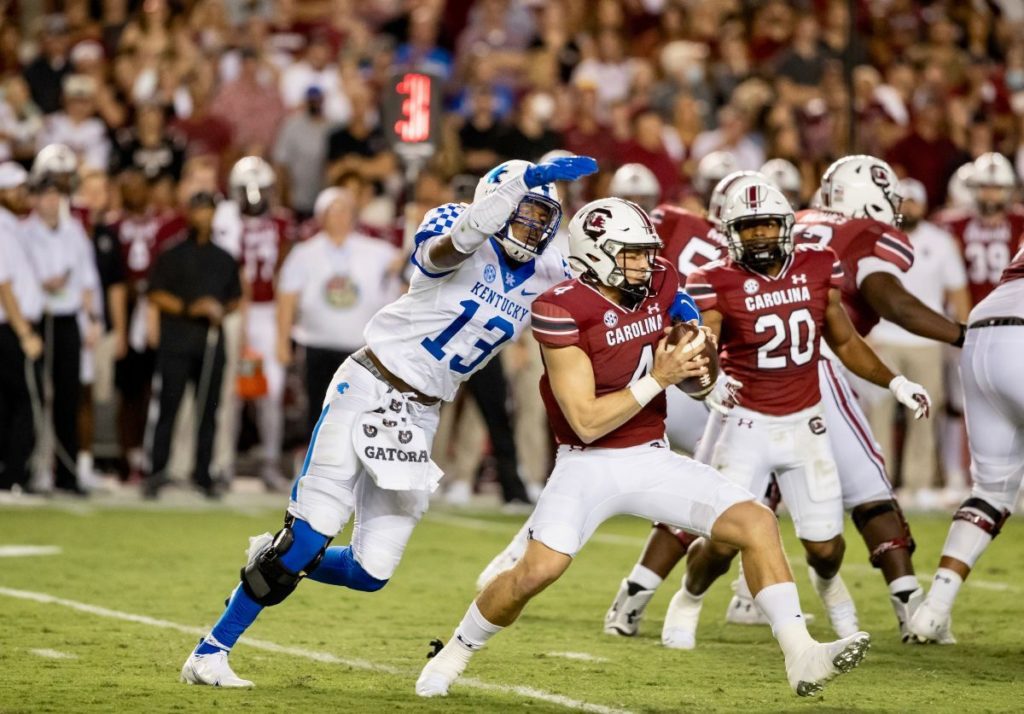 In perhaps one of the strangest schedule moves in Kentucky football history, the ‘Cats will travel to Columbia in late November for the final SEC Game of the season. Aside from the COVID season in 2020 when scheduling got switched up, the Kentucky-South Carolina game is always early in the season, no matter where it’s played. As a matter of fact, this will be the first time Kentucky has ever played in Williams-Brice Stadium in the month of November, and the first time they’ve ever played there after the second week of October. Stoops has been a force against USC in his tenure, with a 7-2 record against the Gamecocks (and should easily improve to 8-2 after this year’s matchup). 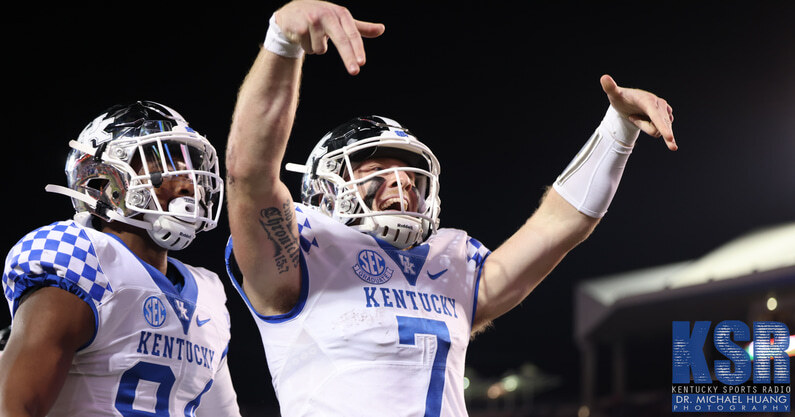 The best early Christmas present is always the last game of the year against Louisville. Kentucky’s dominance over little brother has been nothing short of amazing. Winning 56-10 in 2018, 45-13 in 2019, and 52-21 in the most recent matchup in 2021. Kentucky has been an unstoppable force during this three game winning streak. They should only build upon it this season and the next, in Cardinal Stadium, where the ‘Cats have not lost since 2015. L’s Down!

Next year’s home schedule should be a dream to Big Blue Nation – getting Alabama, Tennessee, and Florida all in Lexington. Kentucky will have to replace Will Levis as QB and Chris Rodriguez Jr. as RB next season – those will not be easy tasks. The good news is that we will have four promising matchups to start out the year before we get into the thick of the schedule next season. And even better, the large majority of next year’s team should be back – the outlook on 2023 is VERY promising!